Request Service or a Free Estimate

Anna Celenza
20:03 01 Apr 22
Wow! I cannot say enough wonderful things about the extraordinary service and workmanship of the AJ Michaels team. From start to finish, every aspect was great! We live in an older home. The AC unit was mounted on the roof and the vibrations were incredibly noisy. They came out and moved the unit, repaired our system, and now we are soooo happy. We don’t hear the AC at all. They stuck to their estimate both price and time wise. And they took great care to protect our floors and clean up after they left. Fabulous!!!

Sheila S. Smith
15:29 23 Mar 22
It was a long and frustrating search to find a company who could expand and service my high velocity air conditioning system. Once I found A.J. Michaels, my problems were solved. They added new lines to my system in a professional, efficient and friendly way. Everything from assessment to scheduling, to installation, to clean-up was perfect. They are my new AC company!

Angie Delaverson
21:08 28 Feb 22
Rick and Tony did a fantastic job replacing a central ac! Their workmanship was a 10plus! Rick was very informative about what he was doing. They both were friendly and professional. I highly recommend them. Thank you guys!

Cheryl Dailey
20:00 09 Feb 22
AJ Michael's proved me with the best price for my mini splits and boiler. They were prompt and courteous.

Yaakov Feinstein
03:28 08 Dec 21
Jim Blake of AJ Michaels has been a pleasure to work with and appreciate his professionalism and competence in both repairing a heating issue as well as an AC issue. I have engaged many HVAC companies and techs over the years but have finally found someone that can get the job done and stands by his work. Thanks!

Laure Ruth
14:56 20 Oct 21
We used AJ Michaels maybe 9 years ago to replace out AC/Heating Unit. They id a great job. This year, we used them to install a Mitsubishi split in our Master Bedroom. They were professional, affordable, polite, timely, pretty much everything you could ask for. We'll use them again if a project comes up.

John Igoe
00:30 08 Oct 21
The new heat pumps work well, installation looks great. Workers were prompt and efficient. I will certainly use this firm in the future.
‹
› 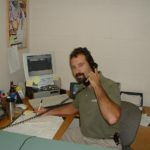 Ryan Small is Vice President of Field Operations at A.J. Michaels. He has been with the company for 26 years and holds an engineering degree from Loyola University and an HVAC/Plumber Journeyman’s license.

As Vice President of Field Operations, Ryan supervises the day–to–day operations of all job installations and field personnel. “I spend a lot of time in my truck driving from jobsite to jobsite, but it beats a desk job.”

After more than a quarter century in the HVAC industry, Ryan has seen it all and cites the evolution of technology as the biggest change. “Today’s systems are so much more efficient and require more knowledge in terms of set-up and tuning. Digital programming including WIFI enabled thermostats are becoming more and more common.”

Recent A.J. Michaels accomplishments include the newly renovated Elephant restaurant, formerly the Brass Elephant, but Ryan is most proud of the emergency jobs he’s been involved with, most notably numerous churches throughout the years with no heat.

“I remember a boiler replacement on Christmas Eve for a church that had no heat in the dead of winter. They were so thankful and appreciative. For us, it’s really a dedication to performing the job to the best of our ability regardless of profit margin. That’s what separates us.”

A diehard Baltimore sports fan and avid trail runner, Ryan enjoys morning jogs in the woods with his dog and spending time at home with his family.